The AVN-Portal series is a group of three powerful audio mix engine interfaces (AVN-PA8, AVN-PD8 & AVN-PM8) capable of audio routing, metering and equalisation. They have both physical audio I/O and AES67 stream I/O and can mix and route freely from any input to any output, useful for a multitude of applications.

See the portal landing page (link here) for summary information for all of the portals.

Communication between products is via RAVENNA/AES67 AoIP allowing simple CAT 5 cabling and expansion. They advertise streams using Avahi/Bonjour and SAP so can be used for Dante™ AES67 enabled streams too.

A built-in responsive web server provides complete remote configuration & control of the unit including matrix mixing and routing, and also allows for firmware updates and configuration backup. Complete product configurations can be saved and loaded for use in different situations and system logs can be saved for device information.

The key to the success of the AVN-PA8 is the mix matrix where physical inputs can be freely mixed and routed with AES67 streams, in a simple and intuitive way to both physical outputs and AES67 streams. 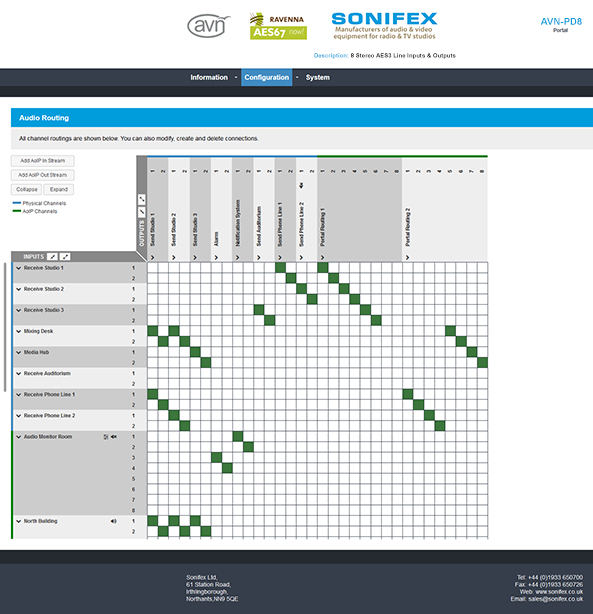 Input and output AES67 streams can be individually added/modified and the SDP of each stream can be checked and edited.

The unit can act as a PTP masterclock or slave clock and supports IEEE1588-2008 PTPv2 media and default profiles.

The AVN-PD8 can be supplied with different front and rear panels. As standard it has a front panel display to show product information and it uses XLRs and D-types for rear panel connectivity.

Using an OLED display, the front panel provides detailed status information on device name, network addresses, PTP clocking info, power status/voltages and version information. The display and navigation controls allow editing of certain functions, limited to networking (IP addresses, friendly name, etc) and display (brightness and contrast). The front panel controls also include user configurable buttons which can be set-up to perform actions such as activating a GPIO or as a shortcut button to jump to a specified menu on the OLED display.

Front panel LEDs show the AoIP network status, synchronisation status and the status of the AC and DC power supply inputs. The brightness of the OLED display and LED indicators can be continuously adjusted for low or high lighting conditions.

The ‘D’ version of the portal (e.g. AVN-PD8D) has two bright TFT meter displays which provide a live display of the levels of the physical inputs and outputs respectively. A rotary navigation control can be used to select a single input or output and view its metering data in a more detailed horizontal view.

Metering can be set to be either ‘Discrete’ or ‘Continuous’, which changes the appearance of the meter bar:

Phase metering can be displayed per stereo channel and channel idents can be shown either above or below the metering to identify each input/output.

On devices without a meter display, a smaller set of monochrome meters are shown on the main OLED display.

For the digital audio, the AVN-PD8 uses D-type sockets with AES59 digital pinout, paralleled with 8 x RJ45 connectors using StudioHub® pinout. There is individual sample rate conversion on each input.

For remote operation and monitoring, SNMP V2 is supported and the units can be controlled using Ember+ commands. 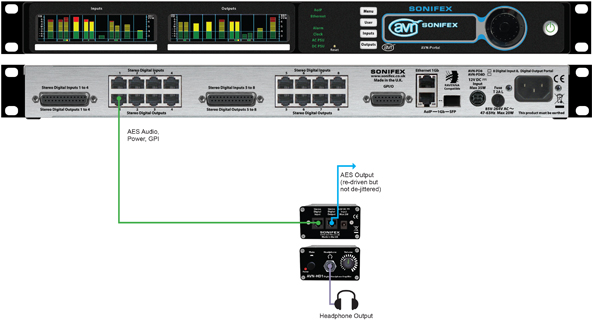 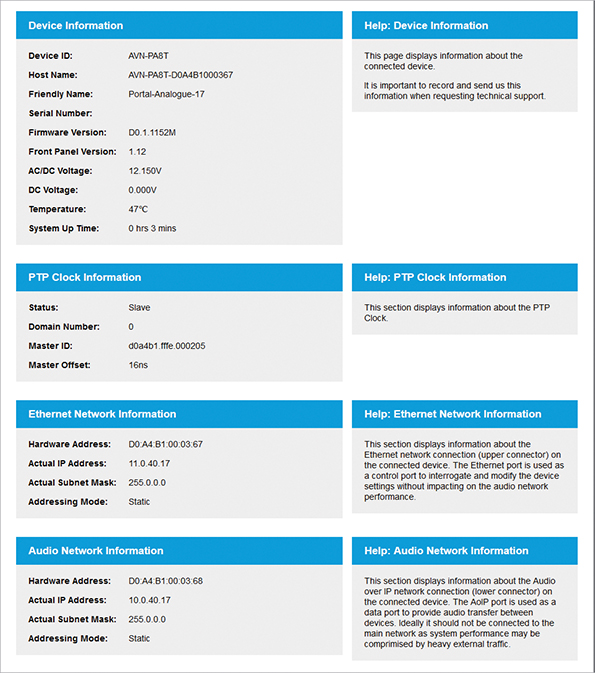 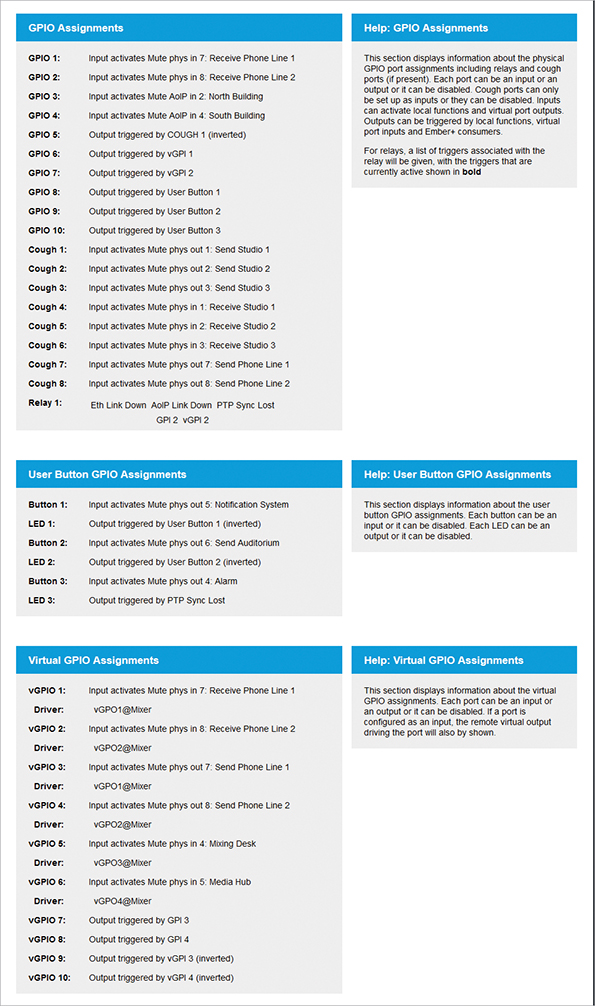 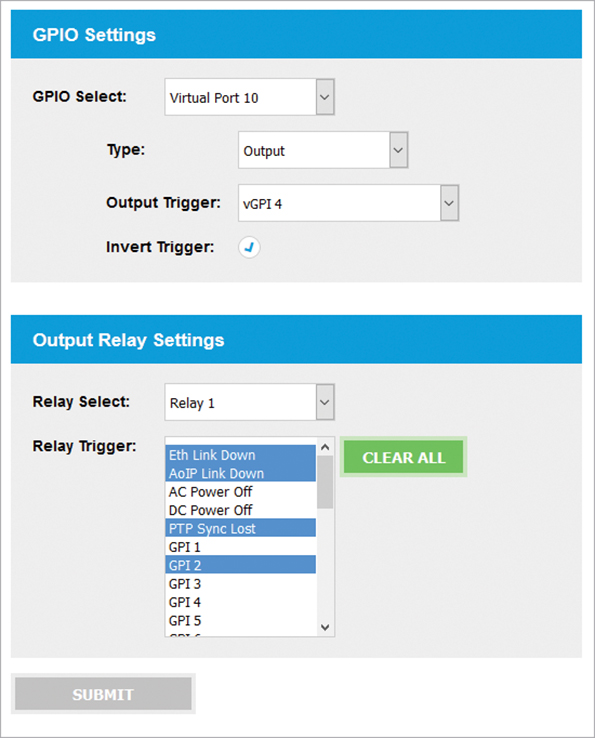 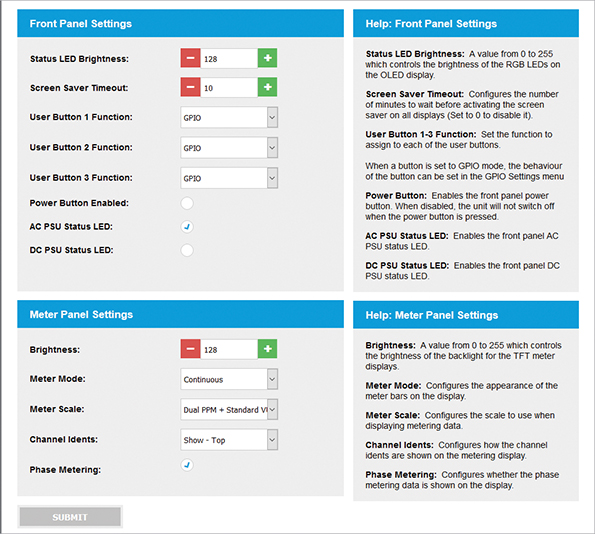