This Product has been discontinued

Station Master is part of the Sonifex range of professional audio products designed for building radio stations on a budget. It combines into a single package all the equipment required for audio distribution, studio switching, talkback and monitoring for up to 4 studios.

Station Master accepts stereo audio feeds from up to 4 studios, switching them individually to transmission using Offer and Accept operation. The output of the current on-air studio is distributed to the other studios via a dedicated bus, avoiding the need for multiple studio distribution links.

The output of the Station Master is provided as a stereo pair and as a mono-feed of the stereo source. The studio switching is achieved using latching relays which retain their switch status if a power-failure occurs.

A profanity delay can be controlled by the Station Master allowing you to install just one delay unit that can be shared by your studios and used by the studio currently on-air.

The Station Master is fitted with a pair of true PPM meters, or VU meters, for monitoring up to 8 stereo sources. These sources consist of the connected studios and four external sources such as news feeds or off air receivers.

The audio can be monitored via headphones, or output to a power amplifier, or via the internal power amplifier, capable of driving 10W into 8Ω speakers. There are also two ¼” jack insert points on the front panel for using the Station Master to monitor from a jack-field.

Station Master distributes up to 4 incoming stereo signals to each of the connected studios without the need for external distribution amplifiers. These signals, such as off-air receivers, news feeds and outside broadcasts, can be professional balanced inputs or at domestic unbalanced line levels. The gain of the incoming stereo signals can be adjusted from the front panel. Distribution gain is controlled by a preset potentiometer.

The Station Master’s talkback system acts as the master station for talkback with 4 satellite systems. These can either be the connected studios or other locations such as a record library or engineering workshop. Individual satellites can talk to each other or broadcast to all stations.

To allow for logging of broadcasts the Station Master has a stereo balanced output for professional logging equipment, together with 3 sets of phono unbalanced outputs for connection to domestic VCR/DVD equipment.

In the event of a power failure to the Station Master, it will continue to route the current on-air studio to the stereo transmission output. Also, when power is re-applied, all switching, including the Offer and Accept switching, will re-initialise to the configuration when power was lost. This means that your on-air studio can continue transmitting, even if power to the Station Master has failed. 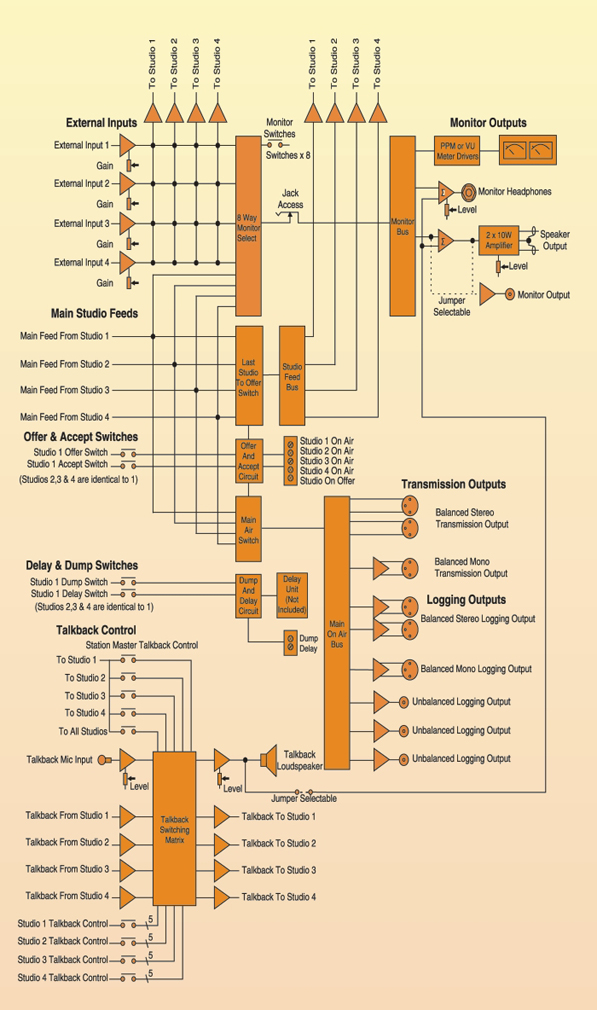 When a studio is on-air, it has accepted the request to transmit and the Accept lamp is illuminated. When a studio reaches the end of its broadcast, the presenter presses the Offer button and the Offer buttons in all connected studios will illuminate to indicate that the transmission is ready to be passed to another studio.

Offer And Accept Switching - How It Works

To Accept the offer, a studio must bring up the “Last Studio to Offer” on the mixer and press the Accept button.

The transmission path is then immediately taken from the accepting studio and its Accept light is illuminated. All the Offer lights in other studios are simultaneously extinguished. Station Master’s front panel shows the status of studios with a LED indication.

Talkback switches must be connected to each studio. Station Master has a set of switches for communication with these studios, together with a talkback level control for altering the level of talkback received from other studios to the in-built speaker. A microphone can be plugged directly into the front of the Station Master for sending talkback to other studios, the level of which may be adjusted via the mic level potentiometer. Talkback is operated by pressing and holding down the button for the chosen studio.

The Station Master is compatible with the TB-SD and TB-SR talkback intercoms.